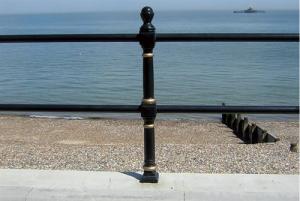 A contractor working on a municipal project in Herne bay came to us with a problem, they needed to install 700ft of rail to an exsisting 8" concrete retaining wall. In a test install of one of the posts two of the fasteners they initially used produced "side face blowout", the 4 bolt plate used at the base of the post put the anchors to close to the side of the retaining wall and the pressure caused by the anchor broke out the concrete. We assured them that the bennettfastener would not cuase this affect,our patented system works on different principal, but we also told them we could provide the same rigid hold with one fastener instead of 4, we redisigned the base plate to except only a center anchorinhg point and small drive in pin. The result was a completed install with a quarter of the hardware and a more clean looking finish on the poasts.